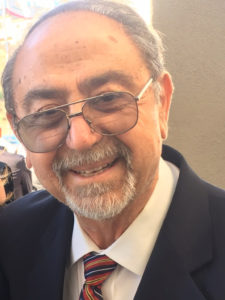 Armen Bagdasarian was born on December 26, 1939 in Hamadan, Iran to genocide survivors Galoust Baghdassarian of Trebizond, a fedayee who fought in the battle of Bashabaran and Dikranouhi Baghdassarian, of Ordu, who was a nurse during the Armenian Genocide. He was immensely proud to be a part of such a tight-knit family of survivors, and had a brother Ardashes Baghdassarian who was nine years his senior, and an adopted sister named Arsenouhi Baghdassarian. Sadly, Armen lost his father to lung disease in 1946 when he was six years old which brought many difficulties to the family. Fortunately, through the support of his hardworking mother, Armen was able grow up with his aunts, cousins, and immediate family in Hamadan, until the family decided to move to Tehran where he attended Koushesh Davitian Armenian school. Armen was an excellent student especially in mathematics, and a member of Tehran’s HMEM Ararat Miutiun as a scout and athlete.

Armen was an excellent athlete in swimming and boxing, who became a champion “akhoyan” of all Iran, though he was unable to participate in the Olympics because of financial difficulties. As an active member of the Armenian Revolutionary Federation, he was involved in many of the activities of the Tashnagtsutiun and was an active member in Tehran and in Kuwait. He traveled to Beirut in 1958 and then moved to Kuwait which led him to eventually move to the United States on July 4, 1966 as a Civil Engineering student.

Armen saw the opportunity to move to San Francisco, California and worked as a waiter at George Mardikian’s “Omar Khayam’s” restaurant with many of his fellow Armenian immigrant students who, to this day, remain a tightly knit band of brothers. In 1968, he married the love of his life, Rita Yaghoubian and they were blessed with two daughters, Sevana and Ani.

His quiet leadership and incredible work ethic as an active member of the San Francisco Armenian community set an example to many. As an integral part of the founding and building of Krouzian Zekarian Vasbouragan School, he worked diligently to ensure that generations of Armenian youth would grow up in the hearth and “ojakh” of Armenian education. As the Chairman of St. Gregory’s Armenian Church Board he saw the creation and growth of a community that he loved. Armen was also an active member of the Triple X Armenian Fraternity.

Simply put, his dedication to the San Francisco Bay Area Armenian community was profound; he was part of a generation of leaders who sprouted the seeds of Armenian culture, heritage, with dedication to the preservation the Armenian language and the church. However, beyond his many years as an Engineer and community member, his biggest achievement was the dedication to his wife and family.