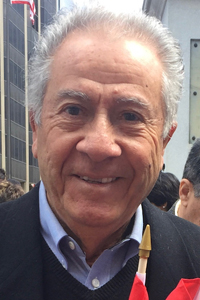 Stephen Stepanian of Needham, formerly of Lexington, passed away on September 29, 2022.

Born in Aleppo, Syria, Stephen was the son of Armenian Genocide survivors Antranig and Asghig Stepanian, originally from Dikranagerd.

Speaking five languages, Steve was culturally rich and ambitious. His immigration to the US in 1955 changed his life and the lives of the family members who followed.

Within six months, he met and married Esther Sarmanian, the daughter of Haroutiun and Lousapar, also Genocide survivors from Marash.

Steve worked hard to build a life and family.

In 1964, he joined Printed Circuit Corporation as its accounting manager. Steadily advancing, Steve ultimately became president of the company and helped it grow from 22 to 500 employees.

During this time, Steve’s family also grew. He and his wife raised three daughters and a son. Together they enjoyed traveling and spending summers in Wolfeboro, NH.

Throughout his life, Steve carried an active love for Armenia, fostering children, supporting several initiatives in the homeland and pursuing justice for Armenia. He governed his home with this love and dedication.