The SR Socially Relevant Film Festival will take place in New York City from March 16-27. The festival features socially relevant human interest stories through both documentary and narrative styles. The lineup features a number of Armenian films that can be viewed both in person and online. All proceeds from ticket sales to The Desire to Live film will be donated to schools in Artsakh in response to the current dire situation in the region. Tickets purchased ahead of time are $12 and tickets purchased at the cinema are $15. A 20-percent discount is being offered with code SR22DISC when purchasing tickets on the website. 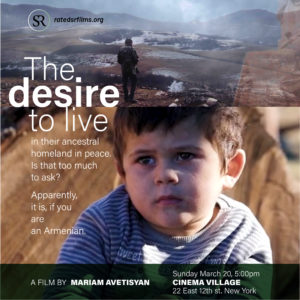 THE DESIRE TO LIVE
New York Premiere
DOCUMENTARY FILM
IN PERSON
Mariam Avetisyan | Artsakh | 2021 | 90 mins
Stories of the indigenous people of Artsakh after the recent 44-day war with Azerbaijan and suffering a devastating loss of lives and land. The desire to live is really a right to live on their lands and be protected from the threat of war, genocide and crimes against their humanity.
Screens on Sunday, March 20, 5:00pm (plays with Lazy People) at Cinema Village 22 E. 12th St, NYC

LAZY PEOPLE
New York Premiere
NARRATIVE SHORT FILM
IN PERSON
Jacqueline Postajian, Kathryn Ferentchak | USA | 2021 | 20 mins
The stories of loss and persistent survival are just under the surface in the community of an all-Armenian apartment complex. When the adults are at work, seven-year old Khatchig’s disastrous attempts to impress his neighborhood crush will have far-reaching repercussions.
Screens on Sunday, March 20, 5:00pm (plays with The Desire to Live) at Cinema Village
22 E. 12th St, NYC

MY NAME IS
DOCUMENTARY SHORT FILM
IN PERSON
Tony Giroux | United Kingdom | 2021 | 13:07 mins
A short documentary into experiences of individuals with non-western first names, its link to their identity and how it correlates to pressures of conforming to westernized English norms.
Screens on Saturday, March 19, 12:00pm at Cinema Village 22 E. 12th St, NYC

HEAR US SWEET FREEDOM
US Premiere
DOCUMENTARY SHORT FILM
IN PERSON
Helen Ispirian | Germany | 2021 | 11:29 mins
A poetic, socio-politically relevant, anti-genre fairy tale. We’re in the future. Art and culture have died out as a result of the pandemic. Solidarosa, Creativia and Financietta are descendants of the so-called “artists.” Only with united forces they might be able to resurrect culture if the gods of arts are gracious.
Screens on Sunday, March 20, 1:00pm at Cinema Village

FILMS ONLINE
AN ARMENIAN TRIPTYCH: RETRACING OUR STEPS
DOCUMENTARY SHORT FILM
ONLINE
Kevork Mourad, Alan Semerdjian, Aram Bajakian | USA | 2021 | 10:58 mins
Grandchildren of Armenian Genocide survivors respond to its haunting legacy and issues of Armenian identity. Guitarist Aram Bajakian, painter Kevork Mourad and writer Alan Semerdjian present individual compositions in their respective disciplines that come together in this animated short film highlighting the power of artistic collaboration as a meaning-making tool in response to intergenerational trauma and the refusal of a people to be erased from history.

LOOK UP
DOCUMENTARY SHORT FILM
ONLINE
Chanel Tossounian | Canada | 2021 | 7 mins
Today’s society is obsessed with Social Media. Look Up highlights how much of it can lead to psychological distress through two young women’s stories.