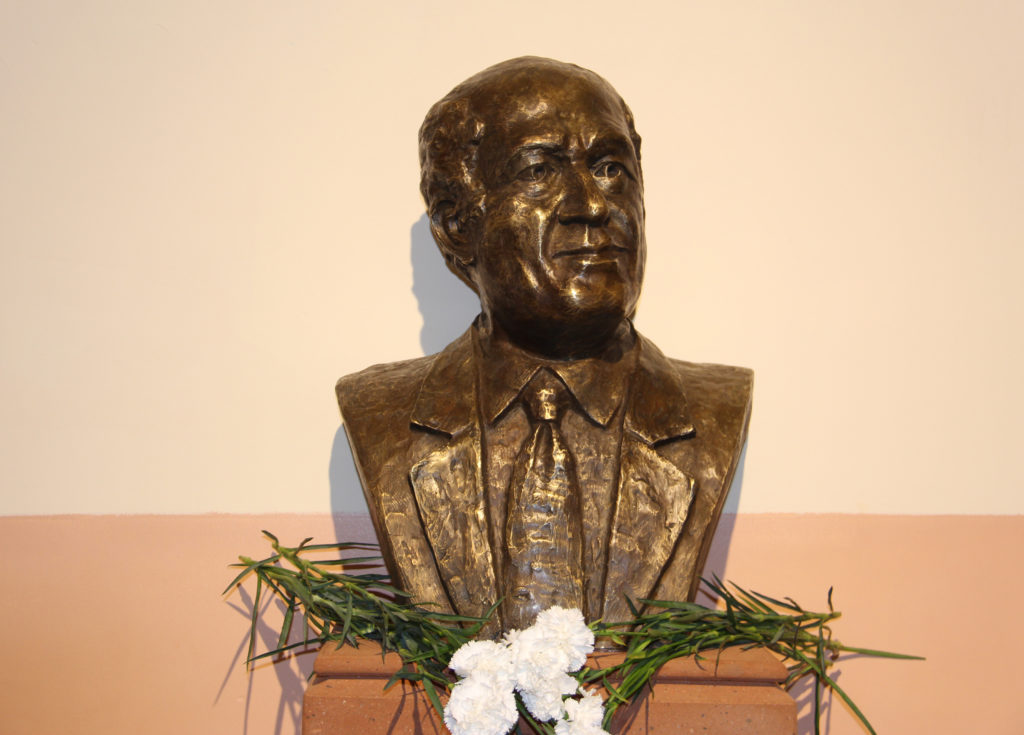 On September 3, 2018 the unveiling of the bust of Rev. Dr. Janbazian, sculpted by Rev. Janbazian’s brother Hagop Janbazian, took place at the Movses Janbazian No. 79 Middle School of Yerevan.

The celebration began with the anthems of the Republic of Armenia and the Movses Janbazian School. School Principal Knarik Hayrapetyan welcomed the guests. Special remarks were made by Rev. Dr. René Léonian, Hagop Janbazian, Aram Sukissyan, Louisa Janbazian, Arch. Khajag Hagopian and others. They spoke about Rev. Janbazian’s life and activities highlighting his patriotic services through the AMAA in Armenia and Artsakh, and his great role in strengthening Armenia – Diaspora ties in education and other spheres.

Sculptor Hagop Janbazian said: “Soaked with national and spiritual ideas, with Rev. Janbazian’s magnificent vision and efforts, the AMAA established its center in the newly independent Armenia, which for the past 27 years has continued its mission of extending a hand to the disadvantaged, the poor, the needy, the students, the children and to all mankind in the Homeland and Artsakh. Yes, Rev. Janbazian’s life was a daily sacrifice for the people and for the Homeland that he worshipped. From Anjar to Beirut and Damascus, from Brazil to the United States of America, from Istanbul to Canada and to the Motherland and Artsakh, he acted unwaveringly, preached with faith tirelessly and unshakably, remaining steadfast, first to his own person and then to his surroundings. He was consumed slowly, transforming his life into a pure and living example with a complete, devotional, nationalistic and spiritual moral fervor.”

Following the official unveiling of the bust, the school children gathered in the Auditorium and presented a special program dedicated to the life of Rev. Janbazian. The program concluded with a video presentation which highlighted Rev. Janbazian’s activities in Armenia and Artsakh.

With the passing of Rev. Janbazian in 2000, the Armenian people lost a great Armenian who faithfully served God and the people and invested his precious contribution into the treasury of the Lord and the nation, forgetting himself, and his own personal needs. He was one of those rare people who became a blessing to the nation that bore him.

It is impossible to list all the contributions Rev. Janbazian made with great devotion. He knew that he did not just work for his time, but also for the future. Rev. Janbazian understood that all the Armenians in the world would become one nation whose Homeland is Armenia, and these two are under one flag, the Armenian tricolor.