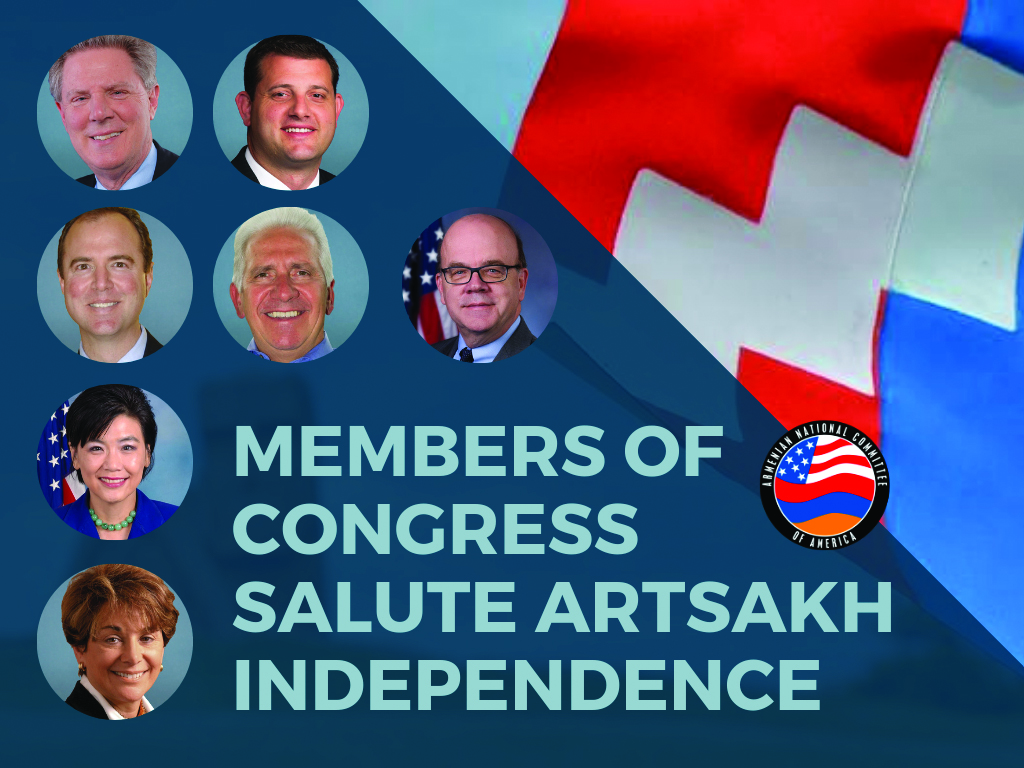 WASHINGTON, DC – A bipartisan group representing the Congressional Armenian Caucus joined with Armenians across the US and around the world in marking the 30th anniversary of the Republic of Artsakh’s (Nagorno Karabakh) independence, pledging to continue efforts to strengthen US-Artsakh ties and push back against ongoing Azerbaijani and Turkish aggression, reported the Armenian National Committee of America (ANCA).

“We mark Artsakh’s independence with our work, together with our Congressional allies – advancing a targeted array of ANCA-backed legislative initiatives blocking US military aid to Azerbaijan and securing US humanitarian assistance to Artsakh,” said ANCA Executive Director Aram Hamparian. “In particular, we look forward, in the coming days and weeks, to cooperating with our Congressional friends, coalition partners, and community activists to stop all Defense Department funding for Azerbaijan’s army – through the FY22 National Defense Authorization Act.”

In videos shared with the ANCA and premiered during September 2nd Artsakh Independence Day celebrations hosted by ANC International in Artsakh’s capital city, Stepanakert, members of Congress congratulated the people of Artsakh for their commitment to peace and democracy, as they continue to recover from the September, 2020 war launched by Azerbaijan with Turkey’s military backing. During the 44-day onslaught, over 5,000 Armenians were killed, more than 100,000 displaced from their ancestral homes, and hundreds of Armenians illegally taken as prisoners of war. The Independence Day program coincided with the official opening of the Armenian National Committee of Artsakh offices.

Rep. Frank Pallone (D-NJ): “I’ve never seen a more resilient people than the people of Artsakh, faced with all this aggression and all these problems from their neighbors around them, and I just want you to know that we in Congress remain supportive of you.  We’re working diligently with President Biden and his Administration with the spending bills to try to see and get as much help to Artsakh, to rebuild as possible, and also to penalize Turkey and Azerbaijan for their aggression. Also, I would like to see, ultimately, official recognition of Artsakh as a state, as a country, an engagement in an official way between the United States and Artsakh, and also really move forward with the peace process.”

Rep. David Valadao (R-CA): “On September 2nd, 1991, the people of Artsakh voted overwhelmingly to stand up to ongoing Azerbaijani aggression – in a fight for freedom to determine their own destiny. […] I visited Artsakh in 2017 and saw first-hand the dedication of its people to peace and self-determination – foundational values that the US and Artsakh share.  I have led efforts on the House floor to ensure expanded US aid to Artsakh, to strengthen US-Artsakh relations, and save lives through demining efforts.  […] I stand with the people of Artsakh and Armenia in condemning Azerbaijani aggression and will continue working with my Congressional colleagues to secure the release of Armenian POWs, zero-out military aid to Azerbaijan, and increase US assistance to Artsakh and Armenia.”

Rep. Adam Schiff (D-CA): “Today we come together to mark Artsakh’s independence day – when 30 years ago, the brave people of Artsakh declared their independence from the Soviet Union. And while Artsakh’s path has never been an easy one, the war over the past year or so has tested the people of Artsakh in unimaginable ways. Your resilience in the face of adversity is an inspiration to all of us. So, on this important day, let’s rededicate ourselves to confronting the many threats to the people of Artsakh. Because independence is just the beginning of the struggle for liberation.”

Rep. Judy Chu (D-CA): “Thirty years ago, in an embrace of democracy and self-determination, the people of Artsakh voted overwhelmingly for independence. Sadly, this peaceful vote was met with years of violence, including the war in the summer of 2020, that left homes and villages destroyed and claimed far too many lives. But I have been to Artsakh and I know how strong the people there are. That is why I am proud to stand with the people of Artsakh and Armenians everywhere. I am committed to ensuring the support needed, to help Artsakh not only rebuild but thrive.”

Rep. Jim Costa (D-CA): “It’s an honor and a great pleasure to shine light on the achievements and contributions made by the people of Artsakh. As we saw with the great American experiment, the path to freedom is never easy. However, we know that freedom and independence are worth fighting for. After three decades, Artsakh and her people have made great strides. Here in America, certainly in my home in the San Joaquin Valley, CA – the land of William Saroyan – Armenian Americans have contributed to the vibrancy and strength of our own democracy.  Please know, my colleagues and I have pledged to continue to work in the US Congress to ensure a free and prosperous Artsakh during these challenging times.”

Rep. Anna Eshoo (D-CA): “Today we celebrate the 30th anniversary of Artsakh’s independence. This is a historic moment for the people of Artsakh. Your resilience against decades of adversity is an inspiration to me and to millions of people around the world. As I speak to you from my office in Washington, DC, across from the Capitol, I want you to know that you have many friends in the US Congress who stand with you against those who refuse to accept your independence and seek to do you harm. I look forward to celebrating many more years of your independence and know that you will always have a friend and a partner in me here in the Congress of the United States.”

Rep. Jim McGovern (D-MA): “Even as Azerbaijan has launched countless assaults and attempted to redraw the map by force, culminating in the deadly wave of Turkish and Azerbaijani violence last September, Artsakh remains standing strong as ever and, just as importantly, remains steadfastly dedicated to long-term regional peace. I want you to know that so many people in Massachusetts and across the United States stand with the people of Artsakh and Armenia in condemning Azerbaijani aggression. And, we will continue working in Congress to build strong support on behalf of Artsakh for a peaceful, democratic, negotiated resolution that treats the people of Artsakh and Armenians everywhere with the dignity and the respect that they deserve.”

In addition to the Congressional video tributes to Artsakh resilience, the Congressional Armenian Caucus leadership sent a congratulatory letter to Artsakh President Arayik Harutyunyan where they emphasized the Caucus’ ongoing support for Artsakh self-determination, their call to penalize Turkey and Azerbaijan for the war waged against Artsakh in the fall of 2020, and urged the Organization for the Security and Cooperation in Europe (OSCE) to include Artsakh in peace negotiations.

The full text of the September 2nd letter sent to President Harutyunyan is provided below.

H.E. Arayik Harutyunyan
President of the Republic of Artsakh
Stepanakert

We write to congratulate you and the people of the Republic of Artsakh on the 30th Anniversary of your independence.

The United States Congressional Caucus on Armenian Issues offers our support and commitment to Artsakh on this celebration of three decades of your independence.  We continue to stand with your people as they face with incredible resilience the ongoing challenges and threats posed by Azerbaijan.  Artsakh’s transformation over the years is truly a testament to its people and to the leaders like you who have helped guide it along the way, despite the constant pressure and acts of aggression taken by the regime of Azerbaijani President Ilham Aliyev.

We continue working diligently to persuade the Biden Administration to take every available diplomatic action to penalize the Azerbaijani & Turkish regimes for their deadly and illegal attacks on Artsakh last fall.  This conflict clearly demonstrates the dire need for international actors to take a stronger position pressuring Aliyev to return in good faith to the Organization for Security and Cooperation in Europe (OSCE) Minsk Group negotiations.  And, we continue to push for Artsakh to directly participate in negotiations regarding its future status and security to ensure a durable and lasting peace.

We remain committed to pushing for official engagement between the United States government and your administration, and we look forward to working with you to build on Artsakh’s already impressive transformation in the face of so many challenges.  Again, please accept our sincerest congratulations on this important occasion and offer our full support for your country.