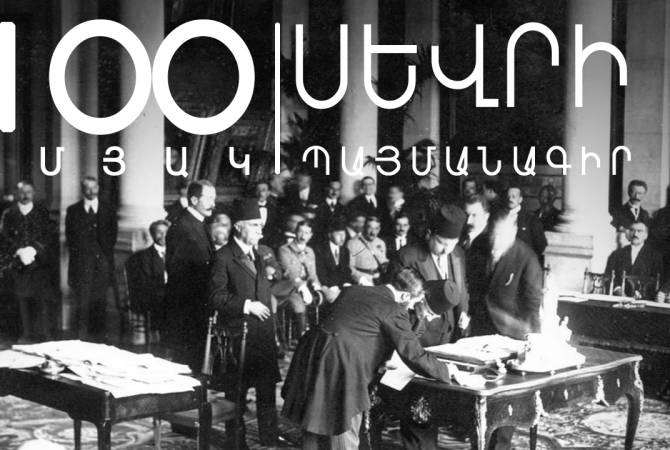 YEREVAN, AUGUST 12—On the occasion of the 100th anniversary of the Treaty of Sèvres, the Armenian Revolutionary Federation press service reports that 10 Armenian parties issued the following joint statement shedding fresh light on the possible international impact of the Sèvres Peace Treaty.

August 10, 2020 marks the 100th anniversary of the signing of the Treaty of Sèvres. The Treaty between the victorious Allies of  World War I and Turkey solved a number of troublesome territorial issues, obliging Turkey, as the defeated side of the World War, to recognize the countries gaining independence from it and clarifying new borders with neighbors.

The Treaty of Sèvres is a document of powerful geopolitical importance aimed at establishing lasting peace in the Middle East, North Africa, and Eastern Europe, in the Balkans. Although further geopolitical developments did not allow the signatory states to ratify the Treaty of Sèvres, it nevertheless became the basis for the independence of many states and the delimitation of interstate borders. Therefore, we are dealing with an agreement that was only partially enforced and implemented, failing to be applied to Armenia.

The section of the Treaty referring to Armenia, inter alia, comprehensively refers to the interstate border between Armenia and Turkey.

It should be documented that on November 22 of the same year, the 28th President of the United States Woodrow Wilson, endowed with international mandate and arbitration, approved the Armenia-Turkey border with the Great Seal of the United States and handed over his decision to all state-signatories of the Treaty.

It is noteworthy that even today’s political behavior of Turkey, which leads to the destabilization of international relations and military and political tensions in the neighboring regions, is largely due to non-implementation of the provisions of the Treaty of Sèvres, including those referring to Armenia.

Consequently, in the background of Turkey’s increasingly aggressive, unpredictable military-political destabilizing actions, even a century later, the principles of regional coexistence of nations expressed in the Treaty of the Sèvres remain relevant as a guarantee of lasting and fair peace, as well as equal development of nations and states in this part of the world.

We, the undersigned parties –

Highlight the historical, political and legal mission of the Sèvres Peace Treaty for the security and future development of the Republic of Armenia and the entire region,

Deem it necessary to shed fresh light on the possible international impact of the Treaty of Sèvres,

Express our unconditional readiness to participate in this process of great national importance,

Call on political organizations and NGOs of the Republic of Armenia to join this initiative.