In 2004, Safarov murdered Gourgen Margaryan during a NATO-sponsored training program in Budapest, Hungary. Safarov broke into the 25-year-old officer’s room in the middle of the night and stabbed the sleeping victim to death with an ax. A Hungarian court convicted Safarov of premeditated murder in 2006 and sentenced him to life in prison. But then, in 2012 he was extradited to Azerbaijan where he was immediately pardoned. Azerbaijan welcomed him as a national hero. He was given an apartment and over eight years of back salary; President Ilham Aliyev also promoted Safarov to lieutenant colonel. In a swift reaction, Armenia severed diplomatic ties with Hungary that very same day.

Now, 6 years later, an Armenian female fighter sought some justice in the officer’s death. Karapetyan reportedly knew she was going to be pitted against Safarova. A YouTube video of the 7-minute match shows Karapetyan forcefully pinning Safarova to the yellow mat; her coaches can be heard shouting and motivating her through the chained ring. At one point, the Azeri fighter needed help from the official to get up. Karapetyan was ultimately declared the champion, as she was photographed holding the Armenian flag with her adversary in the ring. 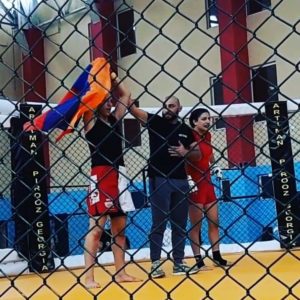 On Facebook, Karapetyan wrote, “I dedicate my victory to the memory of Armenian officer Gurgen Margaryan.” In an interview with aravot-en.am, Karapetyan said of Azerbaijan, “No civilized country makes a reprobate into a hero. If you have a fight with someone, then have courage, go face them in person, look them in the eyes, and win.”